Part of the research of the archaeological site also experimental archaeology as a research method has been used. Experimental archaeology can be used for forming or reviewing hypotheses. Richter has made in her article a subdivision for these kinds of experiment.1 If an experiment comes forward rather from a question of unknown, the experiment is more educational and hypothesis forming. The outcome of the test gives information to formulate a hypothesis on the use or the application. If experimenting originates from an archaeological question or explanation, then the experiment tries to review this hypothesis in its test. It’s more to confirm or to falsify an assumption.

A hypothesis forming research was aimed at the use of Ground Penetrating Radar GPR for the detection of the archaeological site on the sandy dune under the covering layers of clay and peat. The layers of clay and peat above the site varied in cross-section between 2.5 and 4.5 m. Aim of the GPR research was in particularly to test the possibility to demonstrate the Pleistocene relief below surface and to examine to what extent relevant archaeological disturbances in the radar pictures would be visible. After calibration with a limited number of drilling or coring results and the verification with the excavation results the radar profiles present a composition of the subsoil layers and concerning the position and depths of material.

The results of the GPR gave a clear picture of the in altitude varying soil within a few meters below surface. By coupling this level to the results of the drill investigation earlier conducted it could be explained that this was the top of the Pleistocene sand, the old surface at the time of the occupation of the dune. The GPR indicated that the covered sand landscape had a substrate with much more relief than known from the preliminary analysis. Due to the rough field measurements, the data did not give full details enough. The anomalies for the size of flint concentrations or features could not be seen in the results.

The hypothesis has been formed that GPR is a method that can distinguish different subsoil layers of each other, maybe even archaeological layers. If the method also can be applied for the detection of archaeological phenomena such as features or concentrations of flint, will have to be proved in better circumstances, like a flat field for measurement. 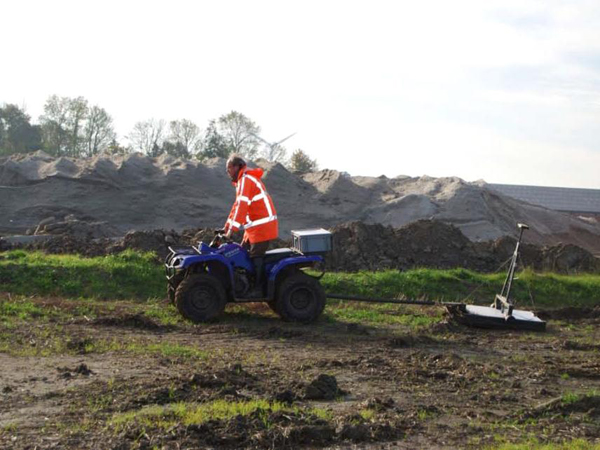 An another type of experiments was the study of use wear traces on flint and the experimental research which is necessary to create a reference collection. In the collection of the Laboratory for Artefact Studies of the University of Leiden no experimental pieces were present which could be used for the analysis of more than 1600 microlithic blades and arrowheads which have been found at the excavation. For this reason a hypothesis forming study into the production and the function of shafted composed tools and arrows has been done.

The research was aimed how small blades of maximum 4 cm length were made. For the experimental archaeologist it was possible to produce a lot of narrow blades from little cores by means of direct hard percussion. Afterwards small retouches were made on the long cutting edges using pressure technique with a thin light hammer stones. This appeared to be easy by simply rolling the stone over the edge to retouch. Two knives, a sickle, five arrow points and two javelins were made by shafting flint in a grip or arrow. The cutting edge of one knife existed of six small pieces of flint, in a another knife three blades were placed. In the moon shaped sickle even nine bits of flint were set in line of each other like a toothed cut. The grips of the tools were made of fresh cut hazel twigs. As a sticking substances for pasting down the flint unmixed birch pitch has been used. In the arrows and the javelins the pieces of flint were glued in a small shallow groove in one or two ranges.

The knives have been used for butchering a hare and cutting flesh (fig. 2 and fig. 3). In spite of fur of the hare it appeared that the flint cut well and stayed well in position in the shaft. The sickle has been used for cutting grasses (fig. 4). This went excellent where the toothed setting of flint formed no obstruction at all. Cutting reeds was much more problematic, even the pieces of flint fell from the sickle. The tips on the arrows and the javelins made clear that by the impact of the experimental shooting the flints are coming of separately or are demolished (fig. 5). Those pieces showed the most traces of use. The micoliths placed more along the arrow or javelin showed less damage or traces of use (fig. 6). 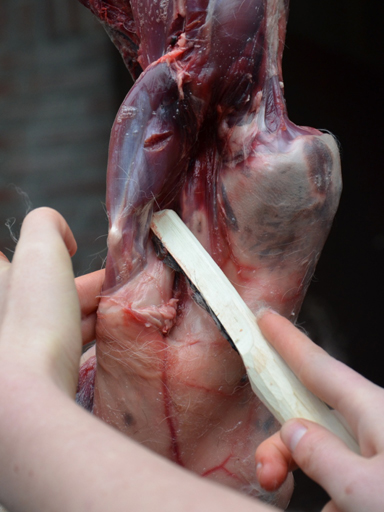 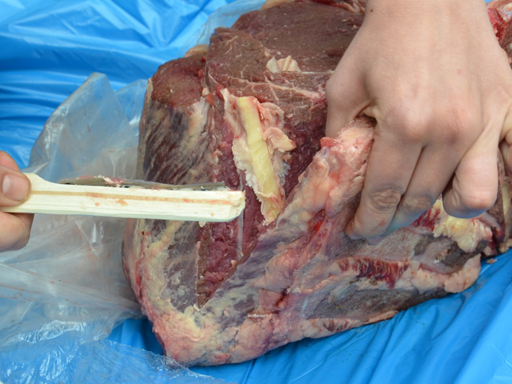 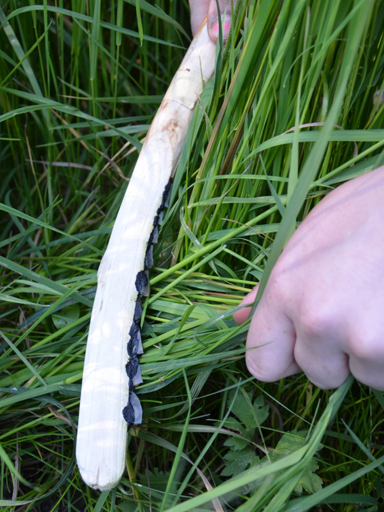 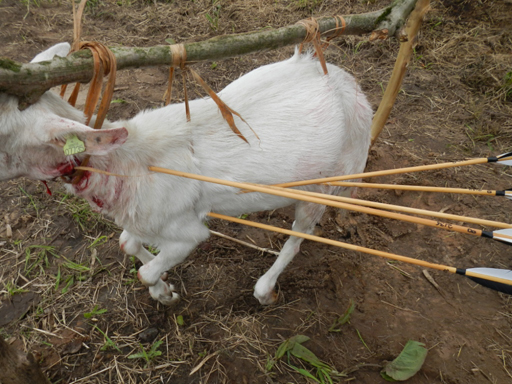 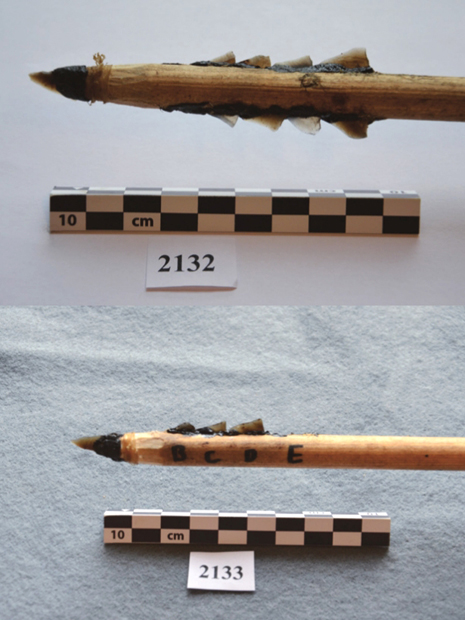