Mobile-learning takes advantage of learners’ mobility allowing them to access educational content while situated in the learning contexts, either location-based or visual. This concept is powered by current intelligent mobile devices (smartphones and tablets), technologies and applications.
Besides other forms of learning promoted in this project (face-to-face workshops, video-based learning, Skype video-conferences), an attention was focused on developing innovative mobile-learning instruments, for which purpose the mobile Augmented Reality (AR) and Virtual Reality (VR) technologies were chosen.

From a technical point of view, the augmentation of the reality is produced by overlapping digital content, i.e. explanatory texts, images, videos, 3D objects over a live video stream. While exploring an AR scene, the users do not lose the connection with the real context. That is the reason that AR is also referred to as a Mixed Reality technology (MR). Furthermore, the AR applications can be connected to social networks, allowing users to perform onsite content sharing and creation.
By contrast to AR, in VR users are totally immersed in a virtual 3D scene, which can be explored by means of a stereoscopic Cardboard or a VR headset (e.g. Samsung Gear VR headset).

The utilization of mobile AR and VR as an educational technologies is well justified for Vadastra and all communities participating in the project, due to the fact that the learners are children from primary and secondary schools, which live in the premises of historical and archaeological sites and are in need of modern tools to discover, understand and learn about their local history. In the same time, the applications can be utilized by teachers, archaeologists and other specialists.

Users are invited to explore the TimeMaps educational and scientific content in AR and VR, by means of the assortment of TimeMaps mobile-learning applications. The applications have been created with different learning purposes, detailed here http://timemaps.net/timemap/?page_id=1425

CLICK the image to download “Albesti2016″ on your smartphone, an Android application for Cardboard (educational app by Liviu Ungureanu). First activate an internet or wireless connection and access this page from your smartphone.
See also Vadastra and Cucuteni Mobile-Learning. 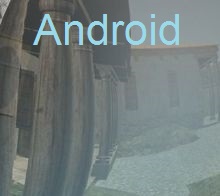