LAND ART
In October 2013 a piece of land-art has been fitted on the outer surface of the line of the castro walls that were excavated from 2011 by the Museum of Prehistoric Art of Mação and Earth and Memory Institute. This land-art was designed by Professor Dragos Gheorghiu in 2010 to present the castro to the world, and in autumn 2013 he decided to move it to make visible the walls excavated by Dr. Davide Delfino.
The artwork has been moved, under the coordination of Dr. Davide Delfino, the Director of the archaeological excavation, and Prof. Dragos Gheorghiu, the coordinator of the Time Maps project, by a team formed of researchers from the Museum of Mação (Ana Bela Boralheiro) and from the Time Maps project (Eng. Livia Stefan), 7 MA students in Prehistoric Archaeology and Rock Art of the Polytechnic Institute of Tomar, and a resident of the City of Mação (Gil Nicolau). 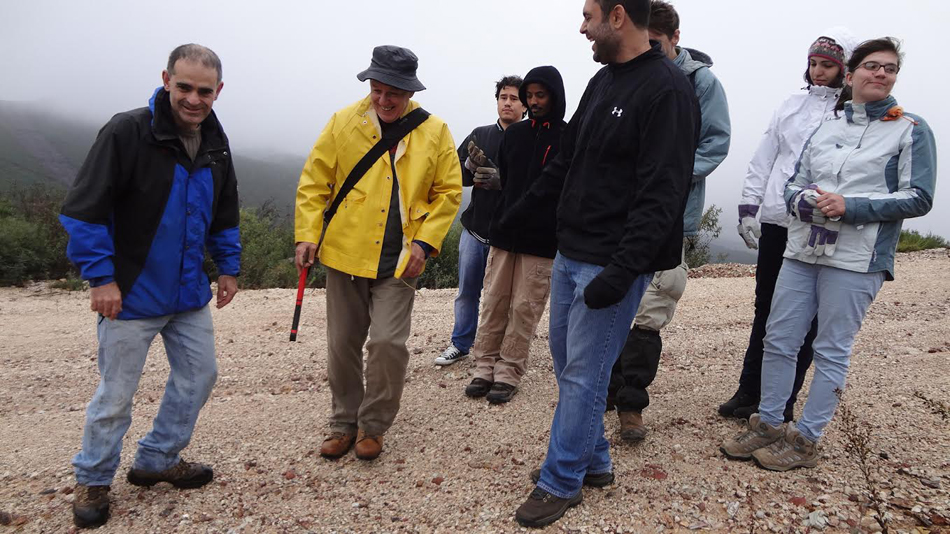 Gheorghiu placed the artwork on the collapsed drywall following Delfino’s excavation, and secured the land-art with cords and stakes. When the sun is shining, the white plastic allows an excellent visibility of the walls’ line. 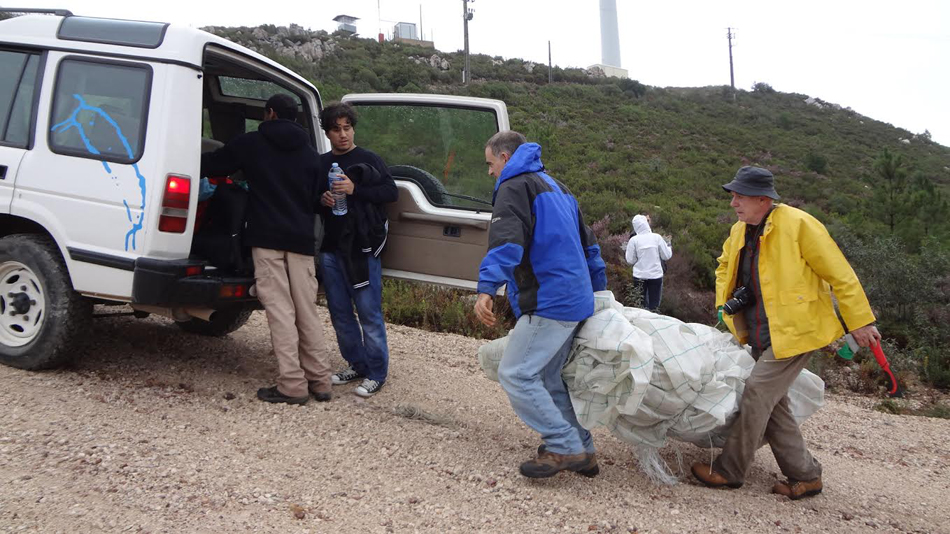 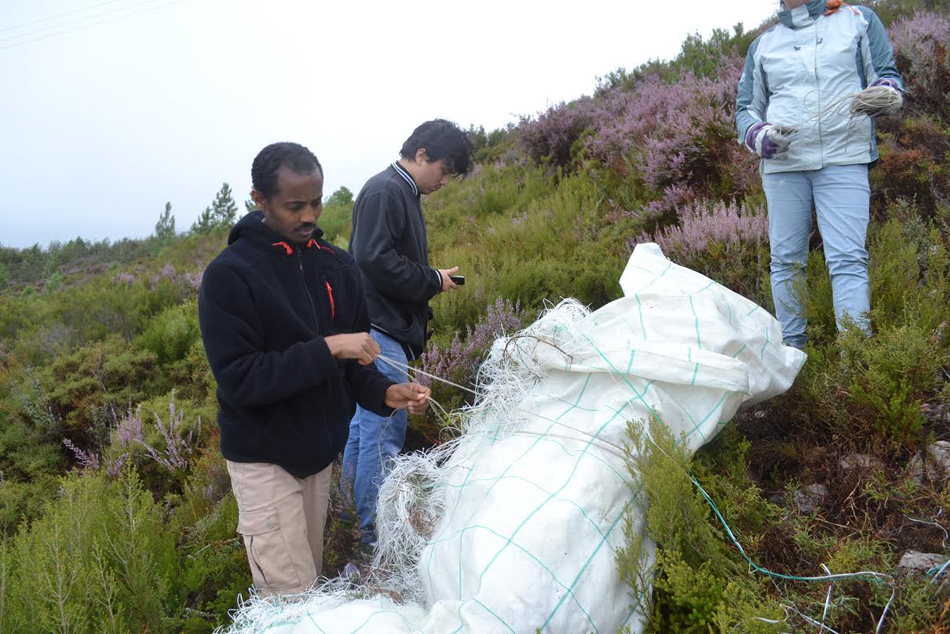 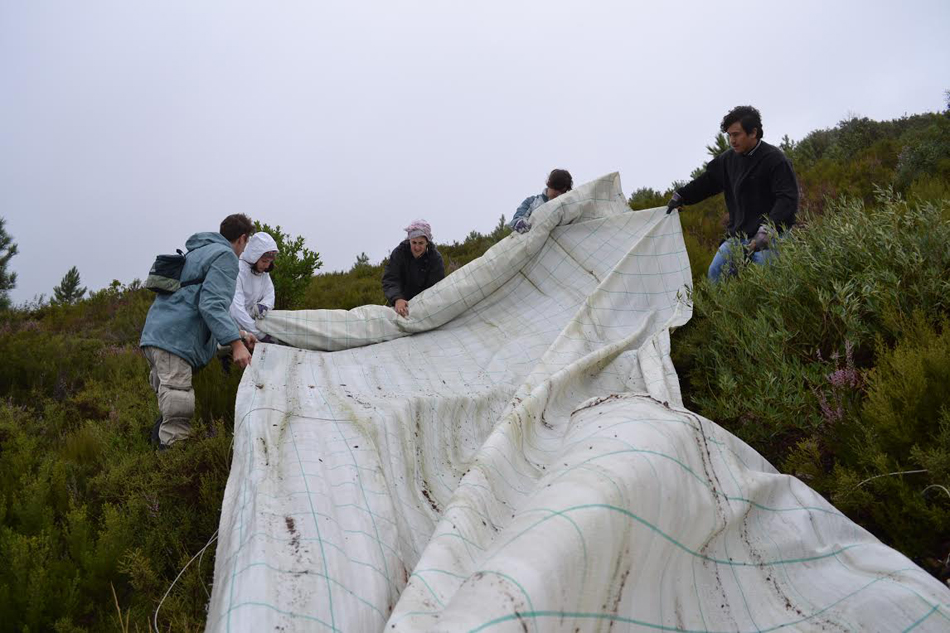 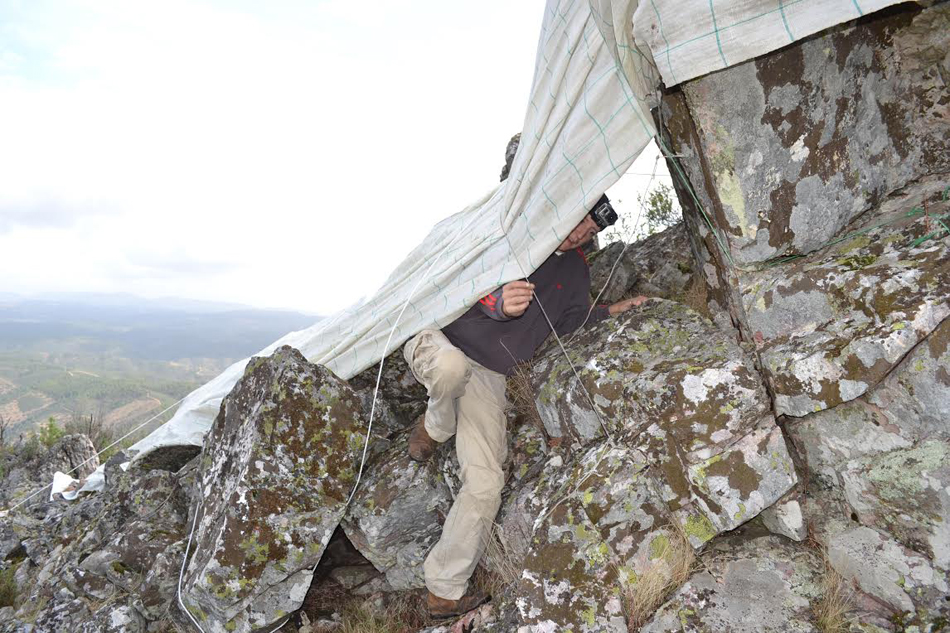 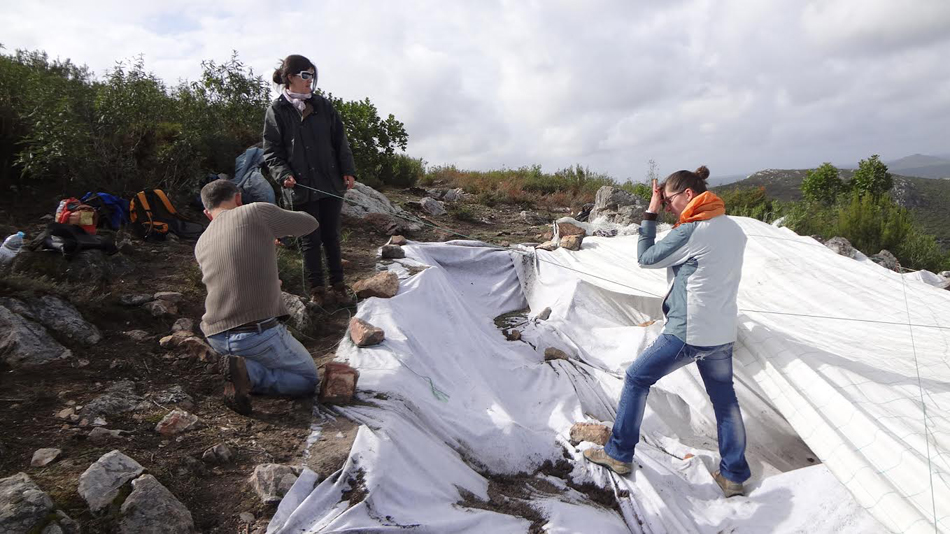 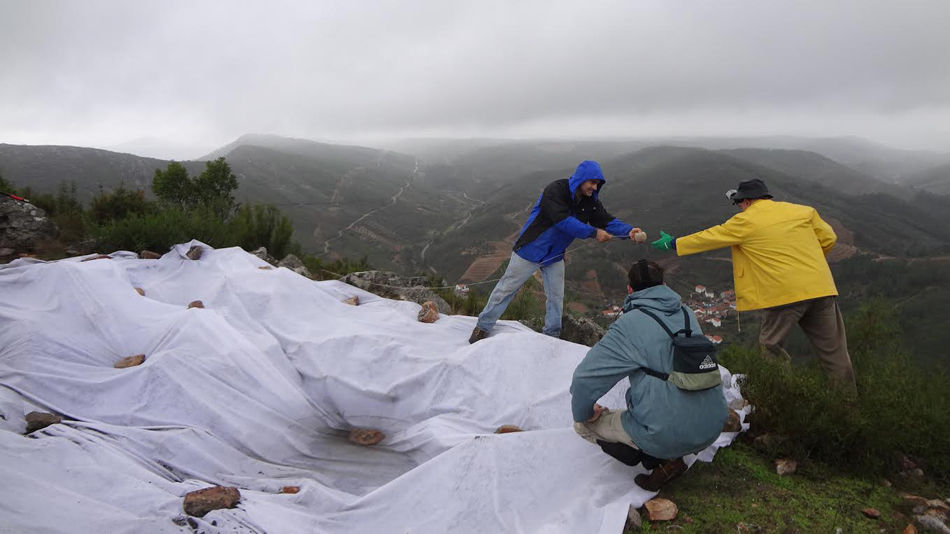 PUBLIC ARCHAEOLOGY
A first result of the impact on the local population was taken immediately after the installation of the Land Art.
On the recommendation of a member of the team, Gil Nicolau, resident in Mação, we visited the nearby village of Zimbreira. Some inhabitants, all elder people, have been invited to see the Land Art. This has been the start of a conversation with the local inhabitants about the Castelo Velho, taking advantage of the memories of the elders in order to learn that, for example only 50 years ago, the stone walls were much more intact than at present. 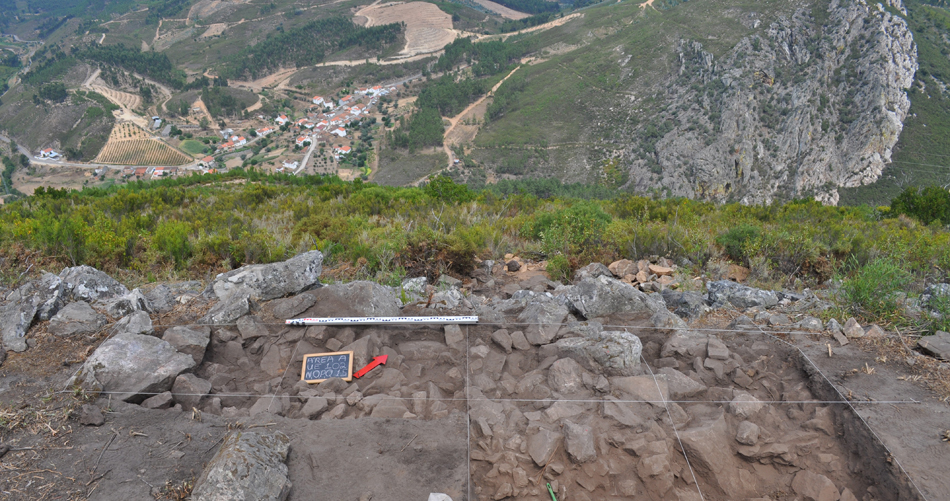 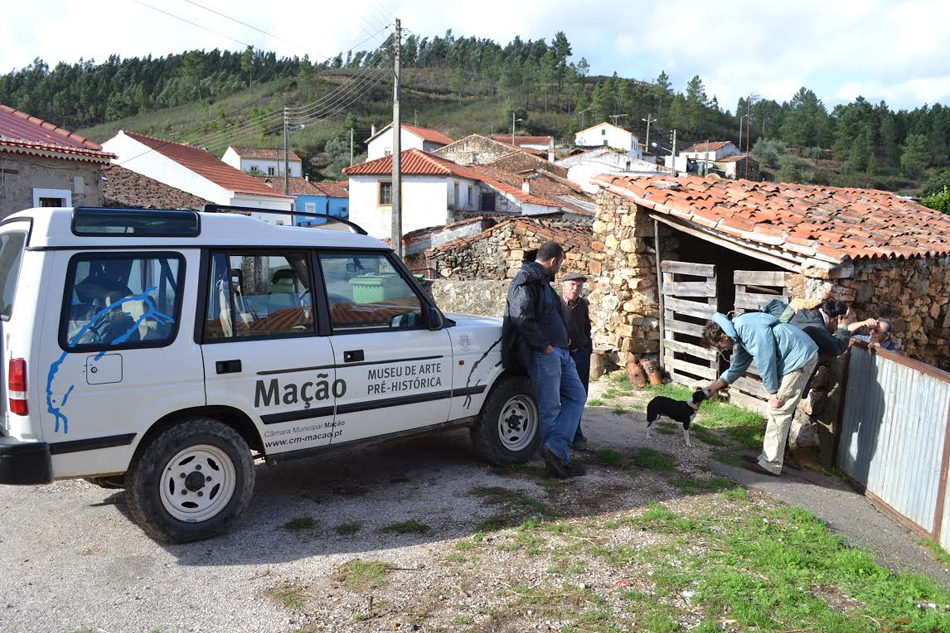 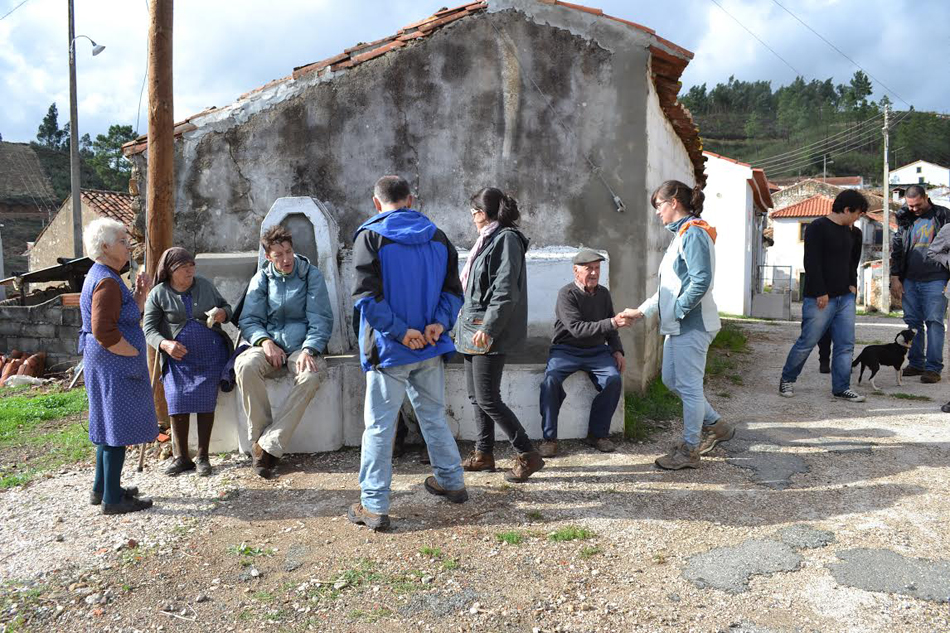 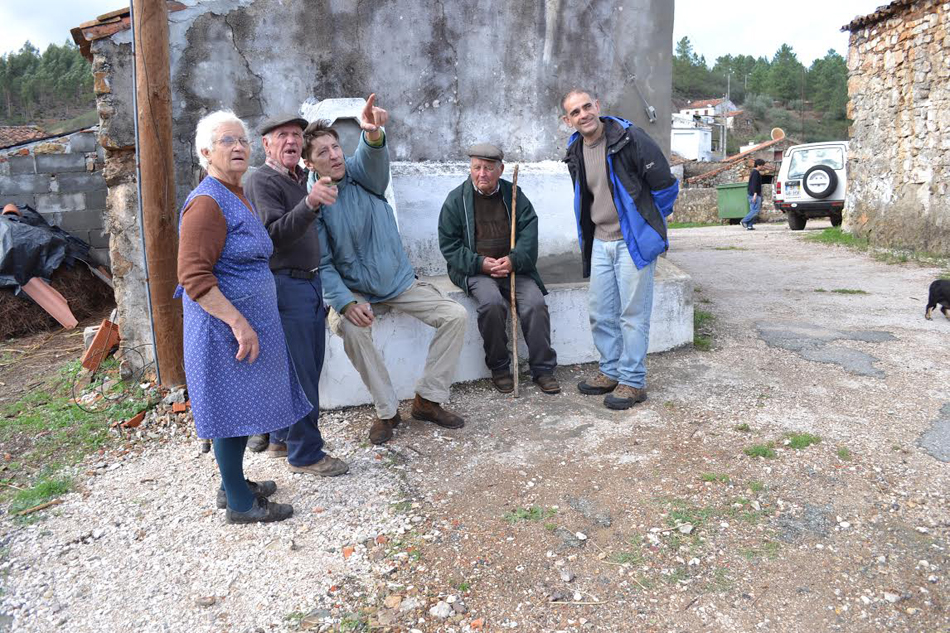 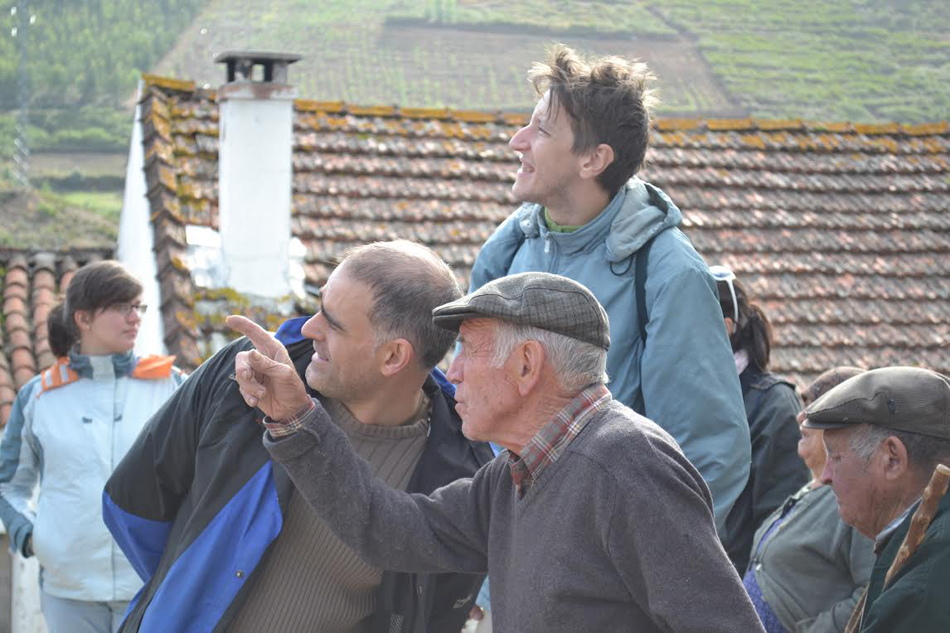 GENERAL RESULTS OF THE LAND ART
Spreading the plastic, the MA students learned the architecture of the Castelo Velho, its role in the ancient landscape and the usefulness of cheap simple artistic performances to cherish, but in the meantime to continue to investigate a prehistoric settlement. 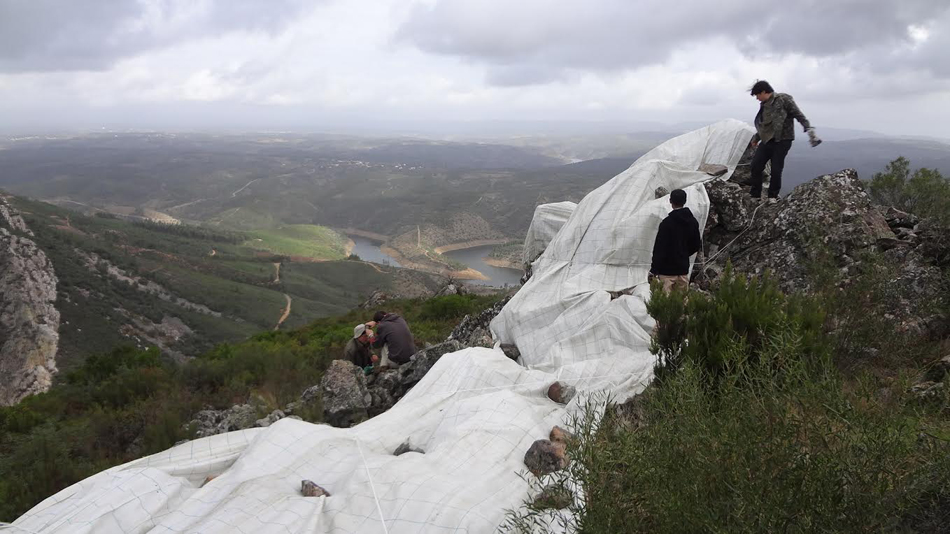 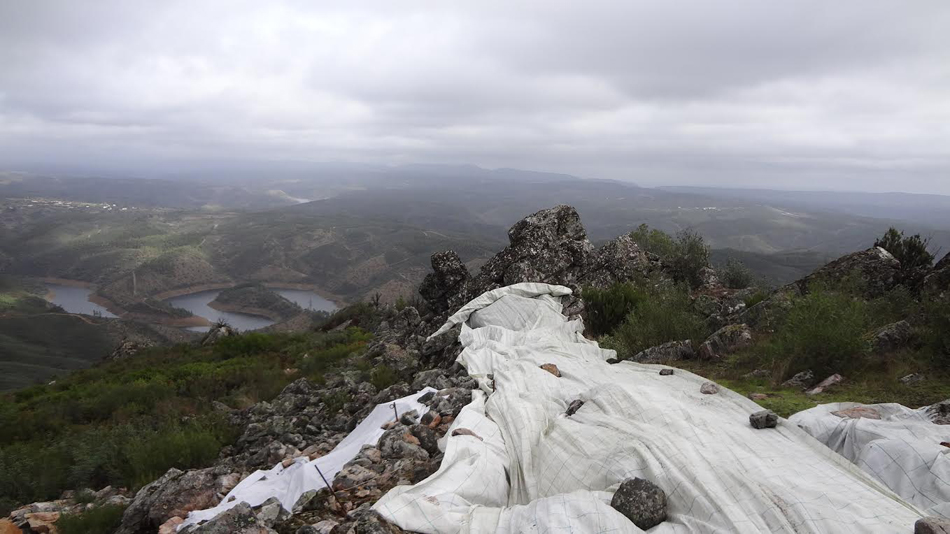 Calling the attention of the residents of a village near the site, we were able to revive the memories from 50 years ago of the elder people on the archaeological remains, and keep alive the attention on the importance of the Old Castle to local memory.
Few miles away from the Old Castle the highlighted wall of the Land Art was still visible even if quite far away. 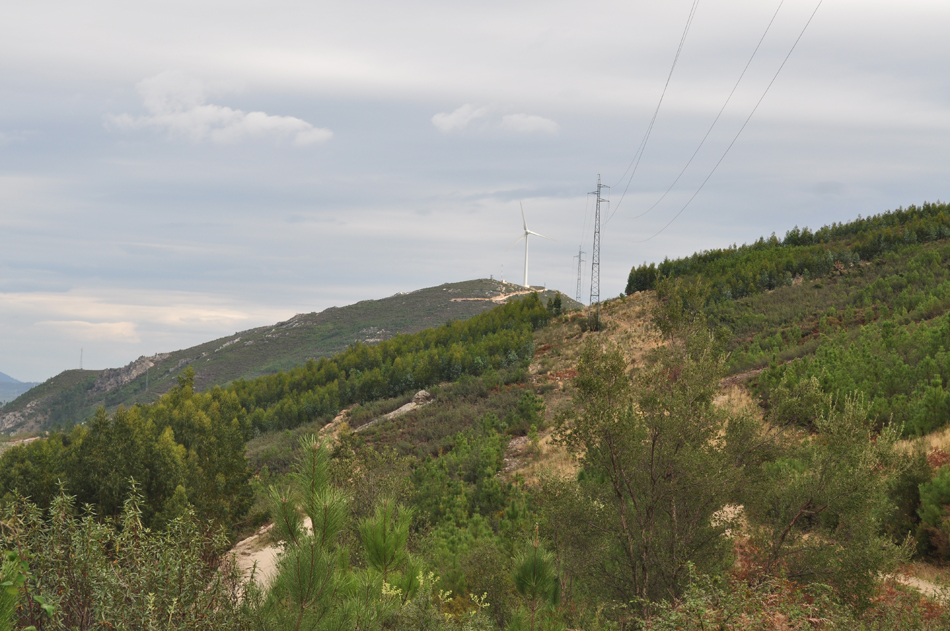 NIGHT INTERVISIBILITY AMONG PROTOHISTORIC HILLFORTS USING BONFIRES
LIGHT AND LEGEND IN THE MAÇÃO HILLFORTS
This was an experiment ion intersite visibility, by observing the hillfort at night, making use of bonfires and involving the local population, thus turning it into an event for experimentation, dissemination, and valorization of prehistoric contexts. The activity was carried out April14th, as part of this year’s International Day of Monuments and Sites, involving tourists and the local community. It was organized by Museum of Prehistoric Art of Mação. 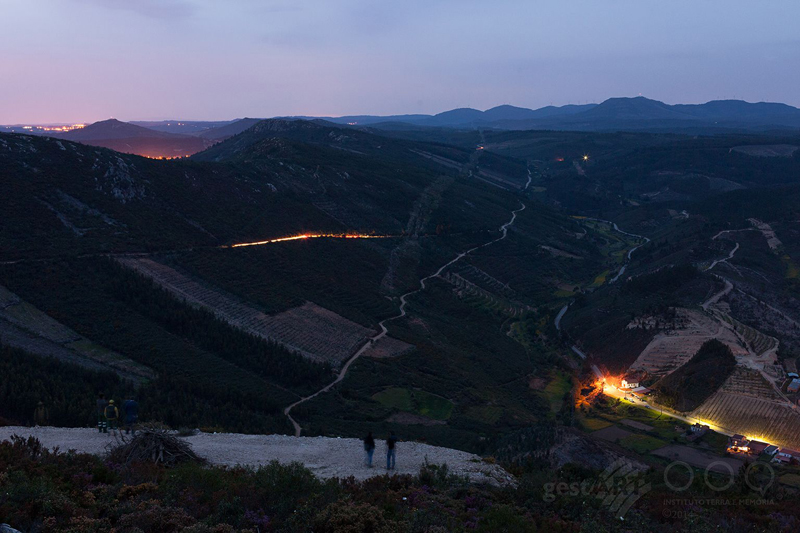 The question was whether the three locations provided clear reciprocal visibility of the sites considered; in other words, whether an observer situated in on site (e.g. Castelo Velho do Caratão) could see and be seen from the other two hillforts… 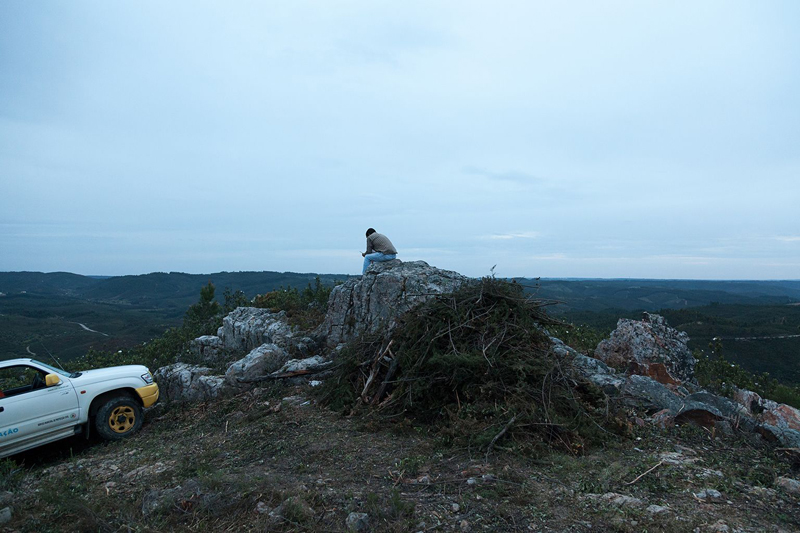 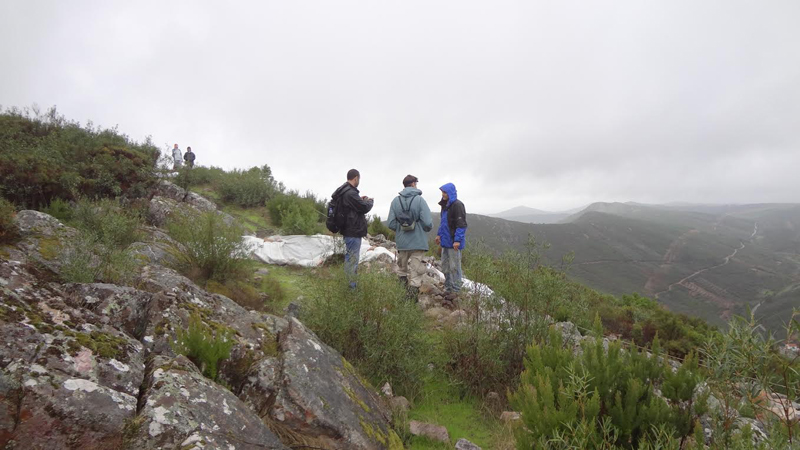 or Castro do Santo. 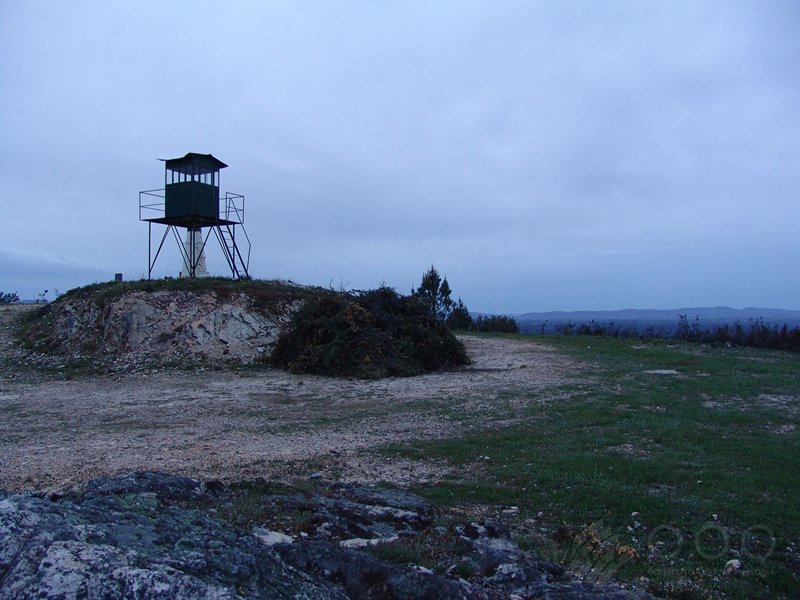 The question is not as easy to answer as it might seem, as currently, normal observations under daylight conditions do not provide a definitive answer. This is the case, for example, of the Castro do Santo viewed from the Castelo Velho da Zimbreira. 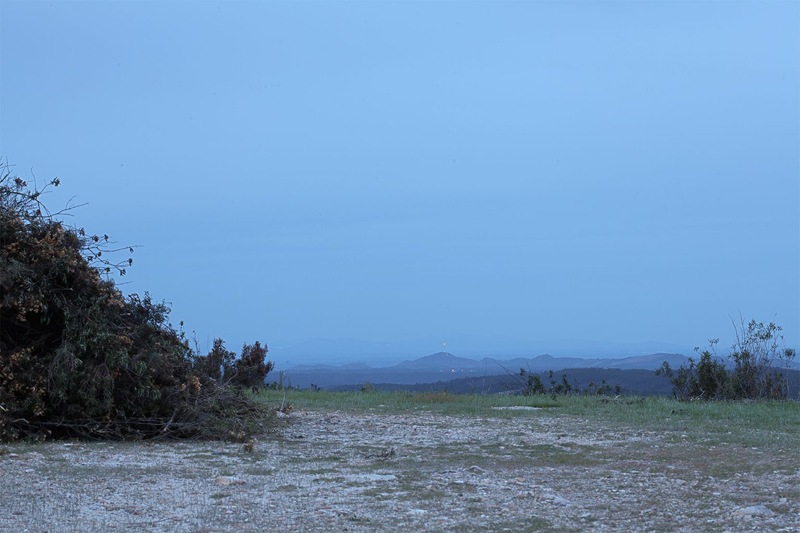 The experiment was planned to start immediately after sunset, rallying the public around the hillfort and the highlighted ancient structures of the Castelo Velho da Zimbreira. Seven elders of rural villages near the hill forts were invited to participate, to recount to the audience legends and tales about the hillforts and their surroundings. 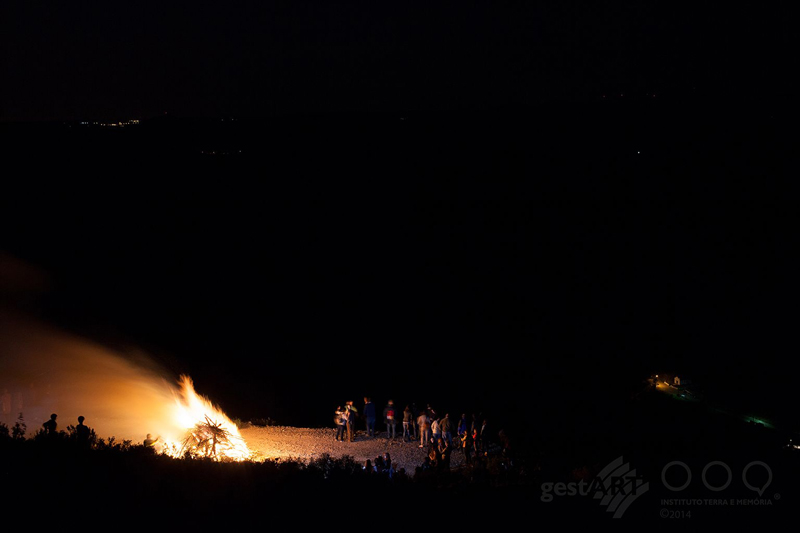 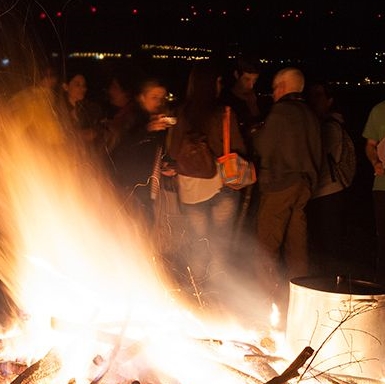 A team composed of students of the Master program in Prehistoric Archaeology and the Doctoral program in “Quaternary: materials and Cultures”, as well as a Civil Protection group were deployed in each hill fort, to supervise the lightning of the fires and for observation. In addition, a 5 person photographer team from the Master in Photography program of I.P.T. was deployed in order to perform a photo shoot at all three fort locations. The City of Mação, the Civil Protection group and the Parish of Envendos and Cardigos have also provided invaluable support.

Team and bonfire in Castro do Santo 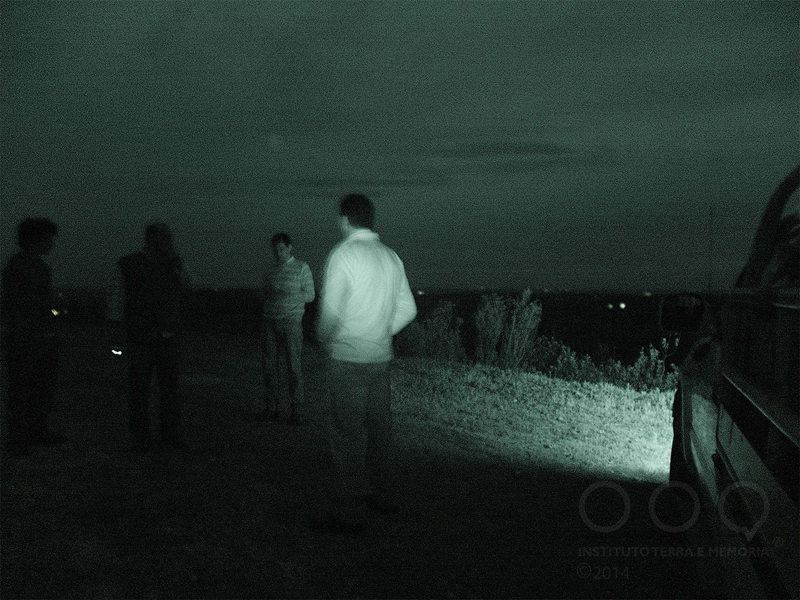 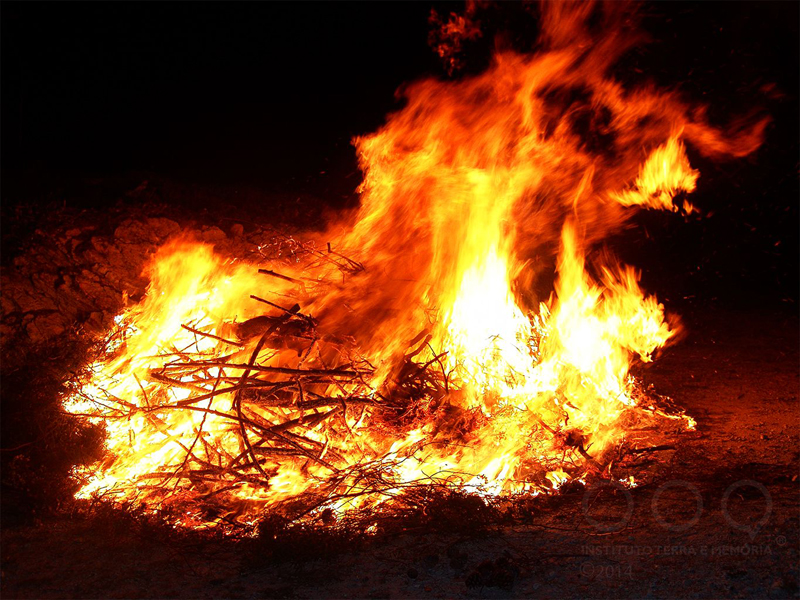 Team and bonfire in Castelo Velho do Caratão 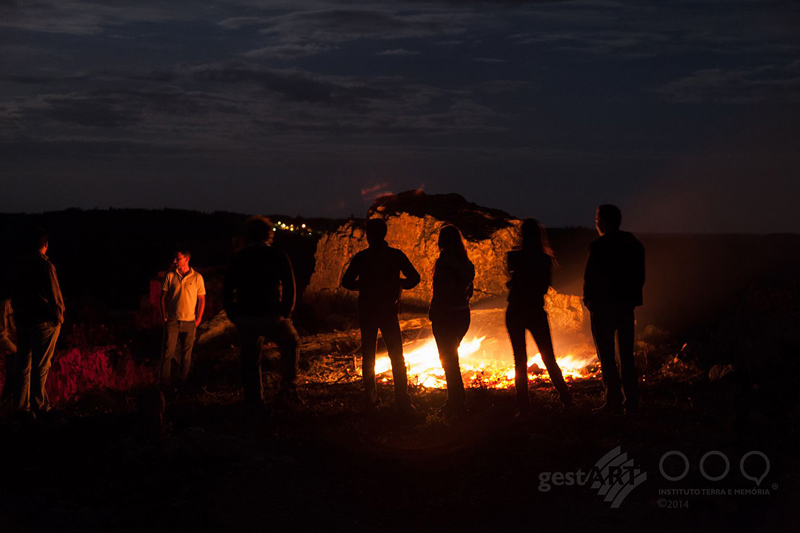 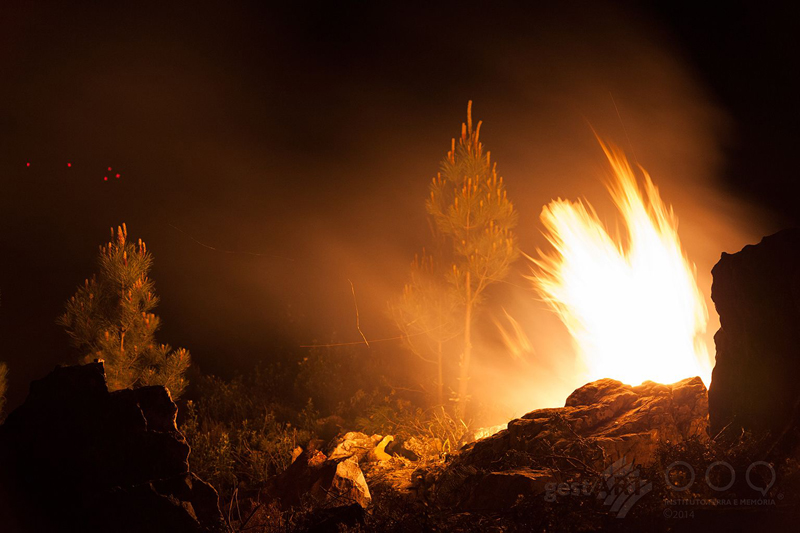 From a dissemination perspective, the experiment attracted 120 people of all age groups (children, adolescents, adults and the elderly) at the Castelo Velho da Zimbreira; these were inhabitants not only from the Municipality of Mação, but also from Coimbra, Tomar and Abrantes. The event made it possible for these people to become familiar with the territory of Mação in the Bronze Age and the sites that were managing it, as well as with the ongoing archaeological research at the Castelo Velho da Zimbreira and the “living memories” of the land: the elders and their tales. 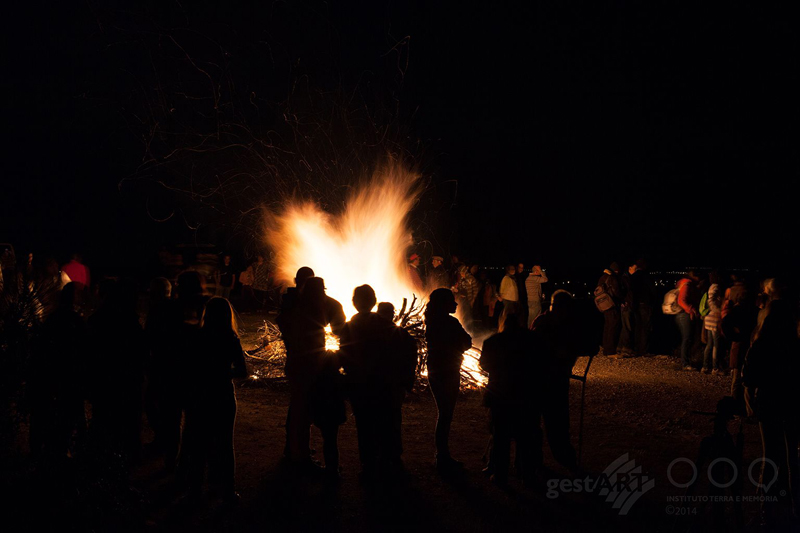 Other Heritage used in the event: the typical herbs tea of the Envendos land. 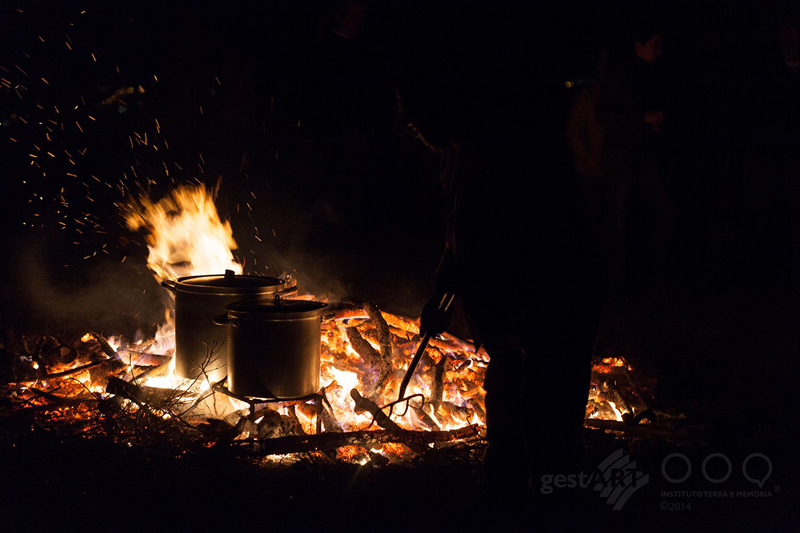 On this occasion 120 people (Fig. 15) discovered the excavated ruins of the hill fort, tried to see from the Castelo Velho Zimbreira hill the fires on the two other hill forts, and also discussed about the archaeological research already made or under way in all three hill forts. By creating a charming setting like a fire kindled in the night and hearing ancient legends told on ancient sites, it was possible to create a simple and economical tool of attractiveness of the archaeological monuments and territory. 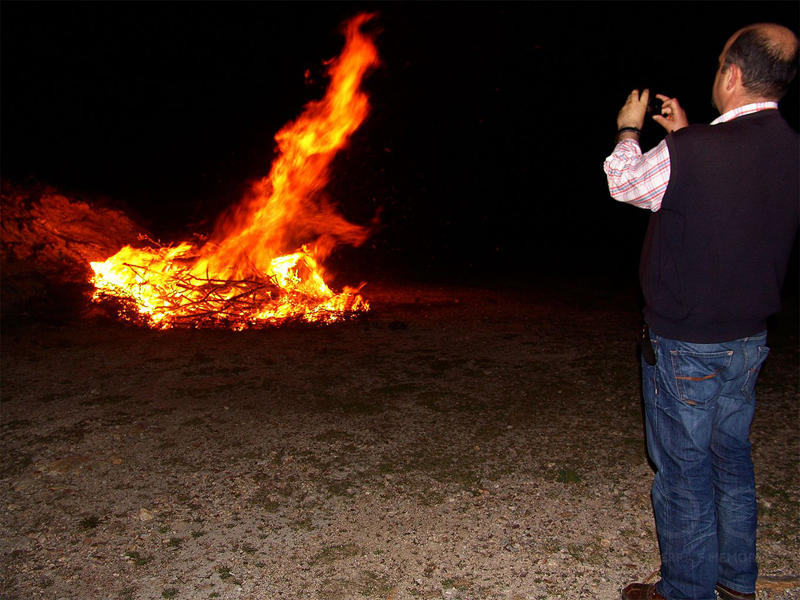 the incentive to be on the very location of the memory of a place and tell and listen to its legends or personal history of old people, has stimulated the participants. These precious living memories had a value in the eyes of the young people since the elders are the only ones who can pass on the local history linked to the territory and its people. On the other hand, to revive the ancient landscape, for one night, was a short recovery, for a few hours, of the immaterial landscape that was material in the Bronze Age, but that is now gone. 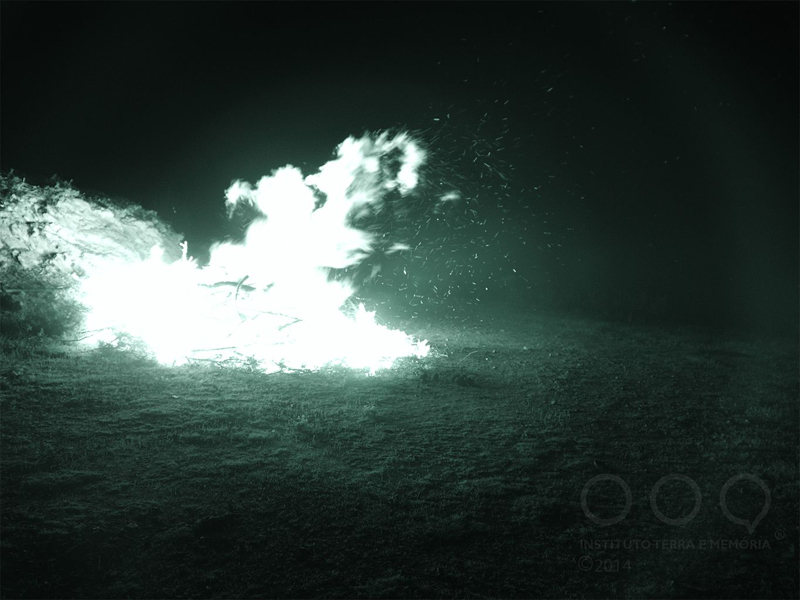